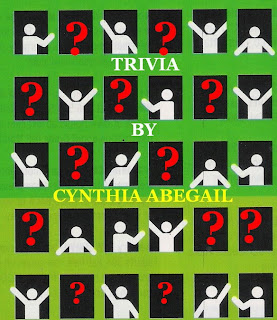 TRIVIA WORLD
1. What is the longest river in the world, about
6695 kilometers?
2. Name the book of the Holy Bible which describes
the New Jerusalem.
3. Who is the actress who portrayed as Juliet in
a film based on Shakespeare's play and as
Mary in a biblical film?
4. What is a figure of speech in poetry
which attributes human qualities to other form
of creatures?
5. There are scattered cells in the pancreas that
produce insulin. What are they called?
6. Do you know the name of a fiery spirit distilled from
cactus, usually of Mexico?
7. What kind of nut is described as small, soft green fleshed nut
covered with a purple-green skin?
8. Who proposed the Cartesian coordinates in Geometry?
9. Who composed the famous "Blue Danube"?
10. Is cockle a type of plant, mammal, sea creature or a bird?