ST THERESE OF LISIEUX ---THE LITTLE FLOWER BY CYNTHIA ABEGAIL 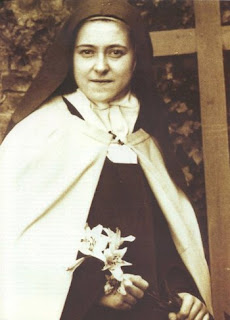 Who would imagine that a simple maiden in Lisieux, France would be one of the greatest saints that was canonised in the Christian tradition? As such, one of the nuns even commented, "What will come out good out of Therese?"

God works in mysterious ways.   Most of the saints do not have doctorate or master degrees but they do become saints, worthy and pleasing in the sight of God! For the criteria set on becoming a saint is judged not by the earthly wisdom that they have demonstrated here on earth but by the life that they have lived!  Did they live the gospel of Christ in their life?  Didthey have a loving and compassionate heart, did they have a great lovefor the Almighty God?  Did they bear suffering joyously?  Did they
submit to the will of God unconditionally?

St Therese cops it all!  She had been attributed through her powerful intercession countless miracles, combined most of the other saints!  Truly amazing.

St Therese in her early days was also intelligent, could have her moods, could have any person's tantrums.  She is a normal teenager, alive andpensive at times.  But she became a saint not because her qualities are likethat of ivory but only because she was sincere and she accepted her limitations.
This is the reason why she pondered on the 'the little way' to reach God.  Then, she was given the greatest honor a saint could ever get.
She became a Doctor of the Church!  Now, let us get this straight.  Anyonecould become a saint if God calls.  Pray, and it will be given unto you.  St Therese, an admirable saint who intercedes for those who invoke her aid by God's grace!
"St Therese, please send us flowers from your heavenly garden!"   Feast of St Therese:  1 October
Labels:  History/Saints---Cynthia Abegail
Posted by CynthiaAbegail at 5:09 AM